How it all began...
Version I:
{As Told By Andrew} 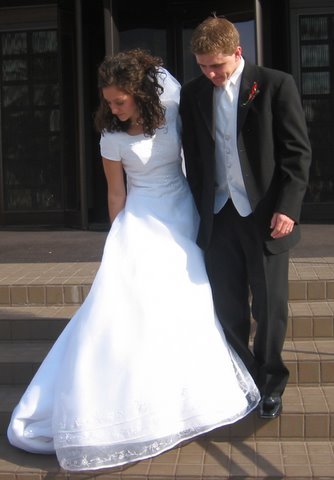 We were first introduced by her sister, and since Rachel was/is so cute I asked her out on a date. Of course she was dieing to go out with me so she said yes...We went to the D-Backs game and we were together everyday after that. She was planning on serving a mission, and actually had her call already...so I knew that I didn't have a lot of time to work the magic, so I laid it on pretty thick.
After 2 weeks, I knew that she was the one I wanted to marry, so I popped the question. She thought I was a little crazy, but was willing to kick around the idea! Sweet! Well, to make a long story short, she took a week to thing about it and we were married 3 months from our first date!
Version II:
{As Told By Rachel} 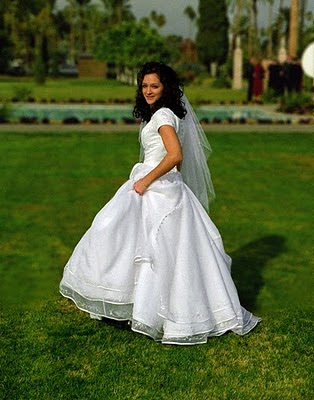 I moved from BYU-Idaho back home to Arizona to prepare for my MISSION to Charleston, West Virginia. My little sister, who had met Andrew at the high school where he had coached wrestling, introduced the two of us in passing at church. I thought nothing of it. A few weeks later, however, I noticed that he kept smiling at me, and I  just knew he was going to ask me out. I was annoyed!

I tried to avoid him until one Sunday Andrew cornered me and asked me to a Diamondback's game. I did not want to go! I was focused on a mission and wanted nothing to do with the drama of dating. But I love baseball, and so I went for the game. I remember dreading that date before he picked me up. Most first dates totally suck, but my mom says that when I got home after this date, I was floating on cloud 9. It was the best first date ever!
We saw one another every day after that...though I kept reminding him that I was leaving in a few weeks to West Virginia. (Why do you keep asking me out??) Ten days from our first date, Andrew asked me to marry him. Well...sort of. He never really even asked me the question or showed me the ring, because when I realized what he was about to do I freaked out, refused to let him ask, and told him he was a cRaZy person.
That next week I couldn't shake the feeling that I should at least think about it, because there had been way too many coincidences to list in the circumstances that allowed us to meet. As I prayed about it, I continued to go forward with my mission plans. I even gave my farewell in Sacrament (with Andrew watching from the back row) and set the date for my temple endowment. The Stake President told me both were good choices and both led to the temple. It was up to me to decide.
Exactly a week after he proposed, I got an unmistakable assurance from the Lord that I was supposed to be with Andrew Ashmore. So, in the Celestial Room of the Mesa Temple, I told him I would be his wife. Two and half months later we were married and moving up to Rexburg, Idaho, to start our new life together. I haven't regretted my decision once!
Email ThisBlogThis!Share to TwitterShare to FacebookShare to Pinterest