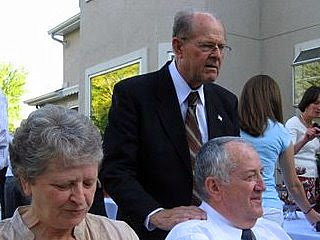 He's really my Great-Uncle Bill...my mom's father's brother. (That is him standing up in the black suit) I went to his funeral this weekend in American Fork, Utah, and I want to post something about him. A quick overview of a few accomplishments, a hardworking farm boy, Uncle Bill was the Stake President of my home Stake when I was in Elementary School. He was also the first popularly elected mayor of our hometown of Gilbert, Arizona. When he first got involved in politics, he was able to win an election as a write-in candidate...that is how impressive of a man he was! He also served as a mission President in Pocatello, Idaho, even amongst developing Parkinson's Disease. These are only a few I remember. But when he passed away in Utah, in Arizona, he was making the nighttime news, the newspapers, and flags were even at half mast.

I mostly just saw him at big family gatherings. Even though my family lived in his house for three years while he served a mission, he and I never really had much one-on-one personal connection. He has managed to have a powerful impact on my life anyhow.

I remember walking into Great Grandma Maggie's little home one evening when I was in high school. Family members were packed in sitting wherever they could, and I was going through the room giving hugs and hellos. When Uncle Bill turned to greet me, I sensed an immediate change in the spirit. I felt a power and a love that seemed to emanate from him tangibly! It was undeniable and I have pondered on the experience many times before. What could have been the cause? I have heard countless beautiful stories of Uncle Bill's kindness, wisdom, and ready forgiveness. The best explanation I have come up with is that he is the most successful person I have been in contact with to receive the image of Christ in his countenance.

Here's one small way he helped my family: When my mom and dad moved to Arizona, they arrived a few days before the moving van and they were absolutely flat broke. I was a few months old and my mom had to wrap me in old dish cloths because she had run out of diapers. They were picking from a roast my mom had brought in a cooler for food. It was supposed to feed them until the moving van arrived. Uncle Bill lives a few miles away from that first Arizona house of ours. That night, he showed up carrying a bag of diapers in one hand and a pizza box in the other. To this day, my mom doesn't know how uncle Bill knew so specifically how to help us. Could I ever be THAT in tune?

But anyway, this is my little tribute to Wilburn J. Brown and for his influence on my life. I frequently think of him as a benchmark...a wonderful example of how I want to live my own life eventually. I'm so glad I got to go the funeral...what a beautiful funeral it was!

Follow this link for an article about him and a better picture. (The Ms. Abbot referred to in the article was my sister's government teacher in high school. She once told the class that Wilburn J. Brown was one of those people who she most admires--without knowing Becca was related. Becca later brought her a painted portrait of Bill as a gift. Ms. Abbot was so moved by the gift that she got emotional! The last time Becca checked, the painting is still hanging above her teacher's desk.)http://www.azcentral.com/news/articles/2008/08/28/20080828gr-brown0828-ON.html

Email ThisBlogThis!Share to TwitterShare to FacebookShare to Pinterest Posted by Rachel Ashmore at 11:49 AM

What an incredible man. It's great to hear about people like him, it gives me hope. Thanks for sharing.