We recently flew up to Washington to join the Ashmores for an extra special family vacation. Our first flight took us from Idaho Falls to Salt Lake City, where we had a two-hour layover.
.
.
My pictures don't begin until the Salt Lake Airport.
.
.
Before this point, I had not been awake long enough to be fully functional (our first flight was reeeeally early).
. 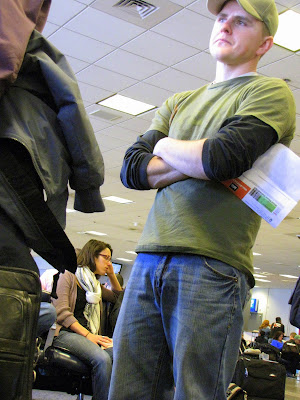 .
.
.
There's not much to do in an airport for two hours but
watch people and eat...both activities I highly enjoy, so it wasn't bad.
.
I started out on my trail mix
{and slapping Andrew's hand each time
he tried to put his raisins back in the bag}... 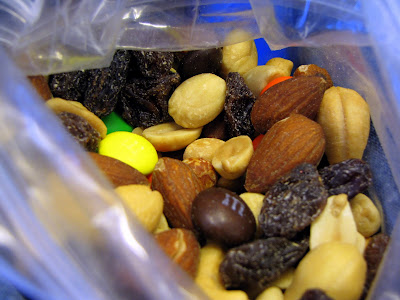 .
.
.
I was quite content with my yummy, healthy snack UNTIL...the scent of the nearby Cinnamabon lured me with its gooey, calorie-filled goodness! I gave in. Andrew and I split one. 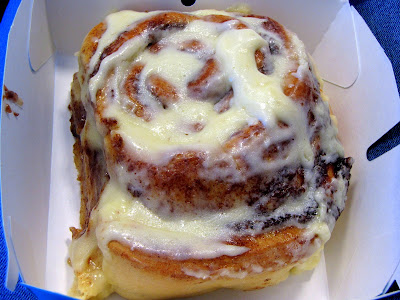 .
.
.
It turned out to be a pretty
good day for people watching:
.
a guy in a turban (don't see many turbans in Rexburg)
90+ old couple holding hands
an Indian lady with a red dot on her forehead
the cutest smiley baby ever
red necked Cowboys
a Catholic priest
LDS missionaries
a basketball team
rich couple with bling like you wouldn't believe
dread-locked Jamaican gangsta
and his mini-me son
. 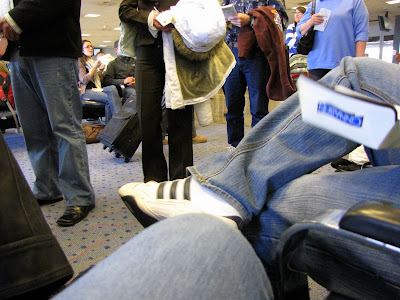 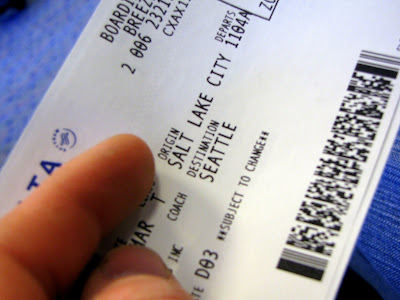 .
.
.
.
We sat next to the Indian lady who as it turned out, didn't speak English. But she was very nice. After a few rounds of charades, I was able to:
.
direct her to the bathroom, help her with her seat belt, learn her name {couldn't even say it then, so don't ask me to repeat it now}, introduce my husband {explaining that I love him very much...she laughed}, and discover this was her 2nd trip to the U.S.
.
the view from our window over The Great Salt Lake 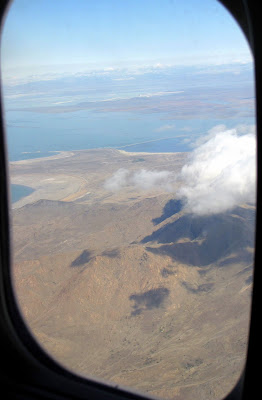 .
.
For the rest of the flight, Andrew and I read, watched sitcoms on the mini screen {without sound}, and took naps. Finally, we emerged from the clouds to a view of the city below. 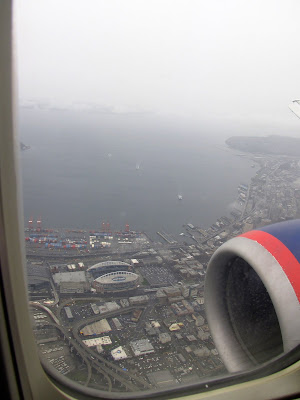 .
.
.
I couldn't get over how green it was! The fact that it was raining--and kept raining for several more days--probably had something to do with it. 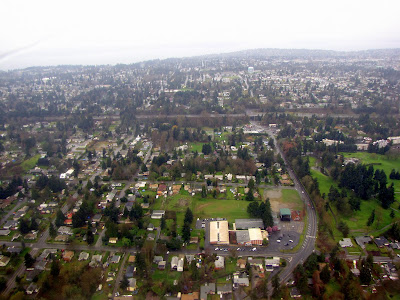 .
.
.
Dad and the boys were there to pick us up.
Good thing the rain wouldn't be affecting our
super awesome vacation plans... 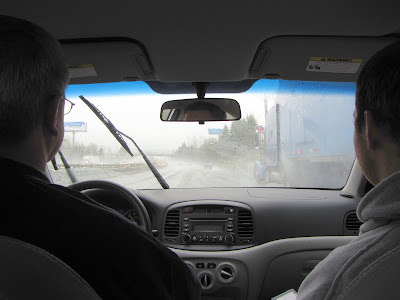 .
.
to be continued...
.
.
.
Email ThisBlogThis!Share to TwitterShare to FacebookShare to Pinterest Posted by Rachel Ashmore at 8:28 PM

I love reading your blog. You have such a way of making me feel like I'm right there with you! Don't I say that every time I comment? Hope you have fun on your vacation!