While in Utah, we met up with my baby sisters, who were visiting from Arizona. This is Aria...one of the twins.
.
.
.
. 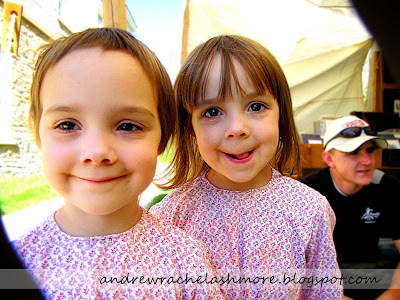 ...Belle doesn't have any hair. Apparently, the girls found a pair of scissors and decided to give her a new do.

But on the bright side, I have no problems telling them apart anymore.

They are in their little pioneer dresses because we were at Pioneer Village at the This Is The Place Monument.

I also saw my sister Aurora. She is six going on sixteen, and quite the little entrepreneur.

I ended up paying a dollar for this original piece of artwork. It is of a Sunday school teacher saying "Jesus is Our God" while her students either play with "betend" guns or pretend to be dead. And God himself looks on from his throne in heaven. Pretty deep for a six-year-old.

Mostly, I just want to know what Sunday school class she's been attending.

It also looks like she's been busy sprouting into a pole bean these last couple months. I can't get over those lanky limbs!
.

They were all at Pioneer Village to support my dad in artwork selling efforts of his own.

He's actually pretty good. You can see more of his artwork HERE.
.

Anyway, that's all for me.

Email ThisBlogThis!Share to TwitterShare to FacebookShare to Pinterest Posted by Rachel Ashmore at 5:40 PM

Just clicking the "next blog" button as my kids are all sleeping and my husband is away (so clicking next blog button when I should be going to bed seems a reasonable thing to do). Anyway, I was just telling my husband the other day that I thought we ought to move to Rexburg (no I've never been there, and no, there is no job there for my husband). Still, glancing through your cute photos made me think all the more that it wouldn't be a half bad place to be!

Rachel,
I cannot believe your sisters are that big!!!! That is crazy! And... I didn't know your dad did artwork!!! That is awesome! I am finally putting your blog in my favorites...it never accured to me til just now, I always go to lanes blog to get to everyone elses...including my own, because i can never remember anyone elses blog titles!...and when i go to facebook...lets just say...i am completely out of my element! you do a wonderful blog though! i am waaaayy jealous of your creativity!