I got a haircut last week. {side view}

I think it's pretty shnazzy. {front view}
snazzy, spiffy, cool with some sophistication, a snazzier update on snappy + jazzy
2.) 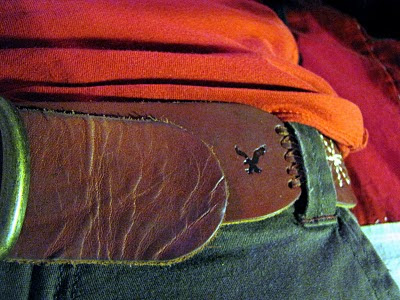 Thrift stores are the BOMB. Brand-new $30 belt from American Eagle {with the tags still on it} for one dollar.
bomb (noun)
1. (before 1995) Something really bad; a failure
2. (after 1995) Something considered excellent and/or the best (uses modifier "the")
Once, I was sitting in a ward council meeting when the young Sunday school president used the phrase "bomb diggity." The juxtaposition of that phrase in such a serious setting, plus the fact that none of the old, balding brethren surrounding me even batted an eyelid, made me very, very happy.

.
.
bomb diggity (adjective)
totally the awesomest, no lie
I encourage all of you to use it in a sentence this week and report back to me.
3.)

It's still winter in Rexburg. In case you were wonderin'.

MMmmmm...There's nothing like leftover pizza for breakfast...
Please tell me I'm not the only one.
left·o·ver  [left-oh-ver]
noun Usually, leftovers. food remaining uneaten at the end of a meal, especially saved for later use. Like microwaved for breakfast the next day.

On a clear day, this is the view of the Tetons from where I work.
work [wurk]
(noun) A worldwide slave labour organization run by *The Man. A place where people have to go everyday to get paid.

*The Man [th uh man]
(noun) The Man is the head of "the establishment" put in place to "bring us down." The Man wields power and seeks to oppress.  In some cases, it's a male Caucasian between the ages of 60-70, with a buzzed head, and an unnatural love for the sound of his own voice. 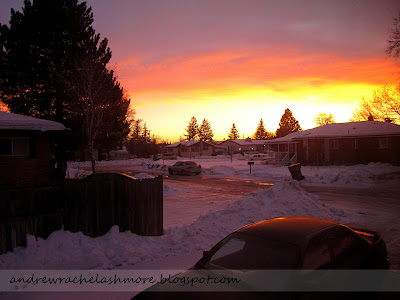 I thought this sunset from the other night was the bomb diggity. So I thought I'd share.


That's all. Aren't you glad we had this talk?

Email ThisBlogThis!Share to TwitterShare to FacebookShare to Pinterest Posted by Rachel Ashmore at 4:47 PM