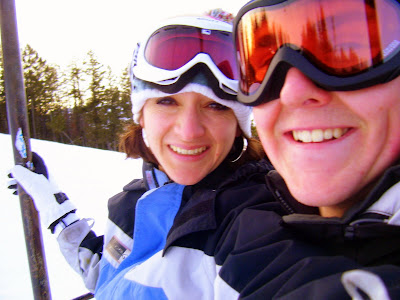 I have to say that the second snowboarding experience is so much better than the first experience. I didn't even fall once on our first run down the mountain this time! Andrew is getting really good too. He speeds down that slope like a crazy man. 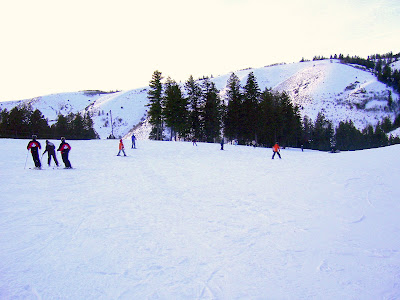 FUNNY STORY: Near the end of the evening, Andrew and I were boarding the lift when somehow, just as we were sitting in the chair, I managed to slip. The teenage operators were too busy flirting to notice me getting dragged by the chair until I was literally hanging from it by the tips of my fingers seven feet in the air. I was a little embarrassed (you know the entire line of people waiting to get on the lift are now pointing at me), but I was able to laugh it off (because it really was very hysterical). After I was helped down from the chair, they wanted me to come up to the front of the line of people and get back on the lift. Everyone was already watching me carefully as it was, but as I was trying to maneuver my way awkwardly through the line on a snowboard, I slipped into a kid... who then slipped into another kid...sending us all to the ground into a tangled (and painful) mess. At this point I just wanted to die. 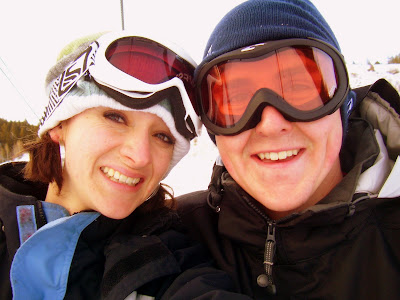 Where was Andrew during all of this? He had been unable to pull me back up onto the chair after I fell, so after I was rescued by a couple of teenagers, Andrew calmly continued his ride up the mountain without me. When we finally met up at the top again, I was so tempted to shrug my shoulder at Andrew's questions as to why it had taken me so long to get back up there. I mean, he didn't really need to know the details of my human dominoes game right?? Oh well. It makes for a great story anyway.
.
Email ThisBlogThis!Share to TwitterShare to FacebookShare to Pinterest Posted by Rachel Ashmore at 9:42 AM

I originally had that I was FOUR feet in the air, but when Andrew saw this post he said I was much higher up then that... so I changed it to SEVEN.That's fine with me. It makes my story seem much more dramatic that way. =)

Rachel,
I love your stories!!! I can just picture you face and it makes me laugh. I am glad you are safe and that you were rescued. Love ya!