.
.
.
I once had a roommate, who had an interesting way of quickly cleaning up. First, she put any clutter in a pile. Then, she would carefully cover the clutter with a blanket or towel. The results were surprisingly effective. What was really an unorganized mess, appeared neat and orderly.
.
.
As a result of this habit, I often wondered something about her. She had a constant smile. Everything about her countenance oozed syrupy sweetness at all times. But was she really always that happy? Was she being sincere? What was she actually feeling below the facade? I sometimes felt the urge to rip back the blanket of cheeriness that covered her true thoughts and feelings.
.
.
A semester later, however, she was gone. And I never did get a good peek at what was hidden underneath.
.
.
.
. 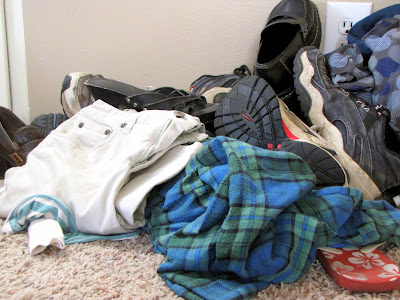 My life began to feel the same way. The business of the past few years, resulted in a home that appeared “put together” and orderly at first glance. However, beneath every piece of furniture, behind every cabinet door, and within every drawer of the house was the epitome of unruliness. A million hasty, half-hearted straighenings were taking a toll on my house and my sanity.
.
.
As part of my self-imposed therapy in preparation of another school year, I have undertaken a massive overhaul of my entire home. I have been an organizing queen!
.
Or freak. Take your pick.
.
.
.
. 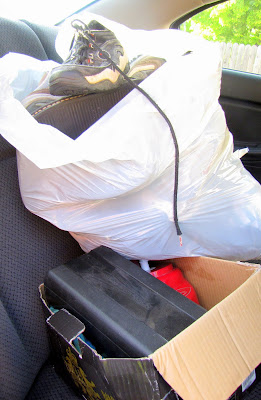 My first order of business was to get rid of LOADS and LOADS of stuff!

Why did I ever feel I might need this stuff in the first place? Where did all this junk come from, anyway? And why did I feel the need to horde every shoe I've ever owned since my feet stopped growing nearly 15 years ago?

After several carloads to the local Deseret Industries, I felt like I at least had room to begin the organizing. 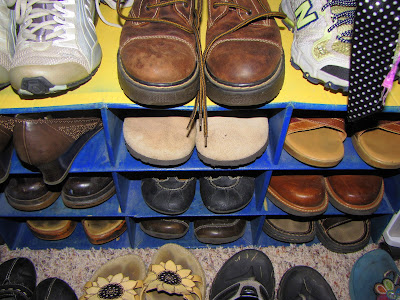 As part of this endeavor, I made an ironclad decision to get rid of shoes. LOTS of shoes.
.
.
Eight pairs to be exact.
.
.
If I can't even fit them all in my closet in an organized fashion, it's time to get rid of oodles of them. I used this rules with everything. Can't fit all my jeans in their drawer? Oodles must go! Don't have enough hangers for all the skirts I've collected over the years? Oodles must go!
.
.
It was a very liberating epiphany.
.
.
.
. 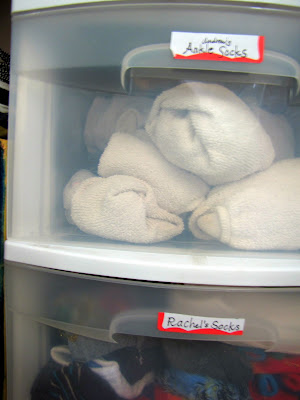 Our sock situation has been enough to drive me over the edge for quite some time now. We've just been throwing all of our socks into these 5 organizer drawers in no particular order. Within the same drawer were my socks, my nylons, Andrew's socks, a gazillion socks with holes in the toe, and a jazillion socks with no match.

First off, I threw everything out with holes. An entire grocery bag full. Then, I labeled the drawers according to style and owner. 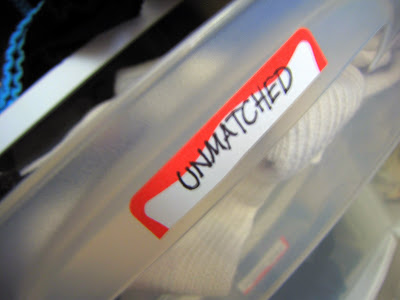 My favorite part was designating one of the little drawers entirely for mismatched socks. Instead of throwing them in with the mix, they are separated and ready to be rummaged through as needed. Every time I fold laundry, I just pull this little drawer out, find as many mates as I can, and then put it away for next time.

Oh the simple joys of housekeeping.
.
. 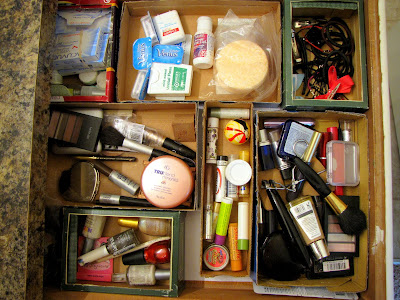 My bathroom drawers were bad. Quite horrifying actually. They were the result of frantically getting ready for work, after sleeping in late, these past two years.

In my search for organization methods, I turned to little cardboard boxes. I cut off the tops, arranged them in the drawers, and assigned it a specific job. For example, one box now holds the nail polishes all together...in one place. Not in four different drawers. It's now the same with the bobby pins, chap sticks, and makeup I use on a daily basis..
. 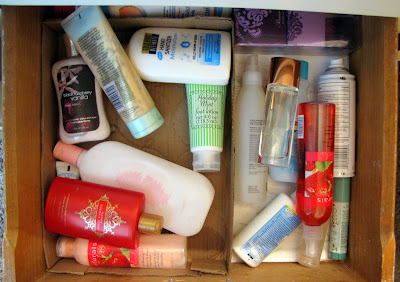 I use this idea for for almost every drawer in the house. Now the lotions are compartmentalized separate from the body sprays... 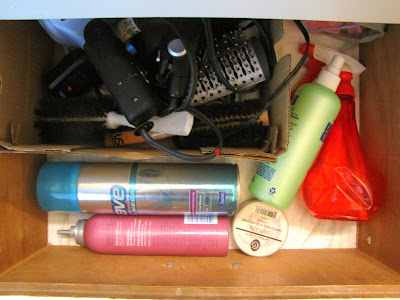 ...And my styling products are separate from the appliances.

This set up has been in place about a month with great success. It's really easy to keep things organized--even when I'm in a hurry. 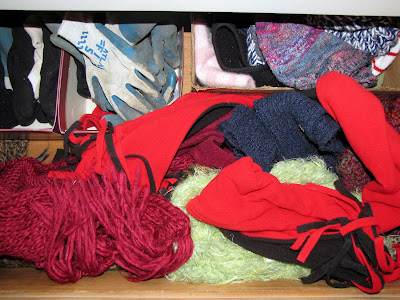 The winter gear was floating aimlessly about the floor of our coat closet. I was able to move it to an empty drawer in the hall that held junk we no longer own. Again, my gloves, Andrew's gloves, snow hats, and scarves all have a home in a separate cardboard compartment. 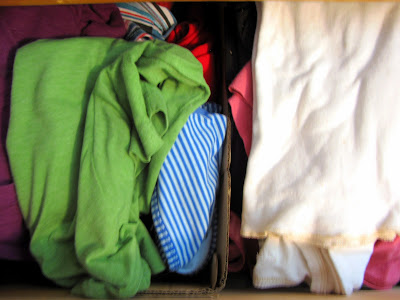 ...cardboard separates the long sleeved tees from the short in this drawer.

I could go on and on about the joys of compartments. But I won't.

You just don't understand the muddled environment my poor brain has been trying to function in!

I wish I had before and after pictures. Though honesty, I probably wouldn't post the befores anyway. I don't think I'd be comfortable with you knowing that much about me. 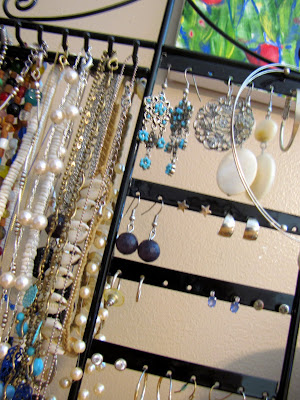 My jewelry has spent the last ten years thrown together in random little boxes. A couple bucks at Wal-Mart and now my earrings and necklaces are available for quick viewing and easy access.

(For all you jewelry thieves out there, you can officially rule out my collection. It is certainly good enough for me, but you'd probably rake in about five whole dollars for my fake diamonds and pearls) 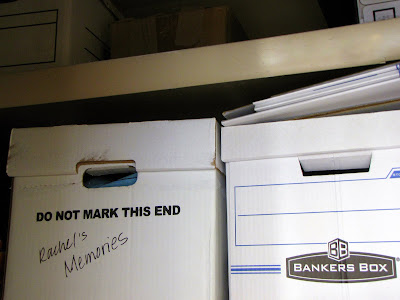 I bought some sturdy boxes with lids and file folders to organize the unmanageable collection of papers and memorabilia. Want to see a pay stub from June 2007? A letter you wrote me 5 years ago? How about the AZ DiamondBack tickets from our first date? I could find it and hand it to you in a minute flat.
.

Do you like how I wrote all over the side labeled: DO NOT MARK THIS END?

I'm such a rebel. 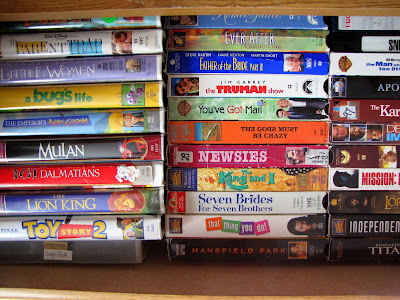 This drawer was full of VHS's, DVD's, photographs, and warranty booklets before I got my hands on it. There is something about the sight of things lined neatly in a row that makes my heart go pitter-patter.
. 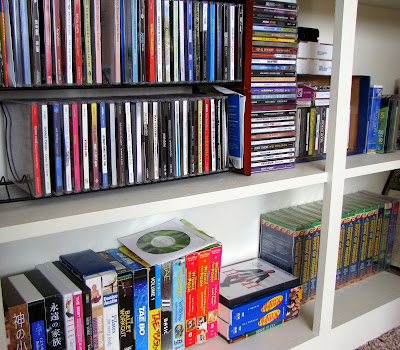 I can't even tell you all that was shoved and piled into this cupboard before I cleaned it out: books, movies, games, picture frames, holiday decor, art supplies, trash...it was a mess.

As it is right next to the TV and stereo, I transformed it into a media cabinet. 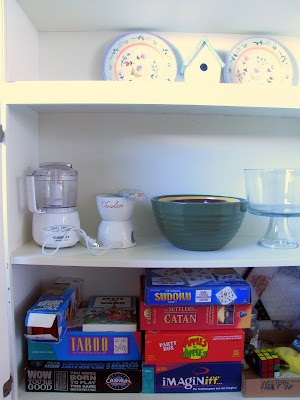 I rearranged cupboards for easy access of our games. They've spent the last three years in a deep drawer that was very frustrating to get into. You won't use what is hard to get to.
.
. 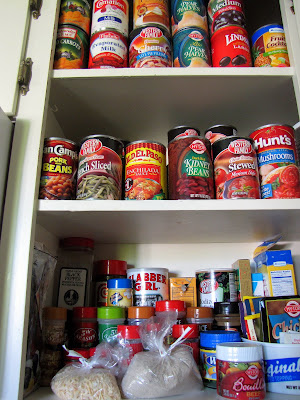 We even spent an entire afternoon wiping out every kitchen cabinet. It was a long time coming. We threw away several trash bags full of stuff we just don't need. I added narrow cardboard boxes on the back of the spice cabinets so that the ingredients in the back sit higher. Now I can see everything in one glance without having to rummage through it all. Also, the many loose gravy and spice packets were consolidated into one holding container.

Every time I open my cabinets now, I get sudden urge to cook something. 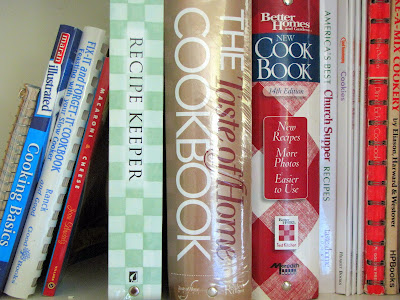 My cookbooks have spent most of their existence piled on top of each other in a deep drawer. An emptied shelf works so much better! I can see all of them at once.
.
.
.

Now, wasn't sifting through the contents of my drawers just utterly fascinating? If you are stuck with me until the very end of this post, you deserve a gold star.
.
.

I haven't reached every corner of the house yet, but just let me just share with you the benefits of de-cluttering, consolidating, and rearranging my home thus far:
.

2.) I use what I have to a better capacity now that everything is easy to find and get to

3.) With less STUFF, I have to pick up the house less often

4.) I waste so much less time looking for what I need

5.) Laundry seems to get get accomplished at a more efficient rate

7.) I'm less likely to get overwhelmed by other things, because I feel more in control of my environment

8.) We have more time and space to to spread out games, hobbies, and other toys to play with

9.) I have felt more motivated to do the household chores because they feel more manageable

10.) The Spirit of the Lord dwells in our home in greater abundance
.
.
.
.
Here's the challenge: Go get rid of 25 things right now. It'll feel so much better!
.
.
.
.
Email ThisBlogThis!Share to TwitterShare to FacebookShare to Pinterest Posted by Rachel Ashmore at 9:40 PM

thanks for the shoutout about the earring tree. Oh wait. And you got rid of pants and skirts without running them by me!?

Amen! I LOVE throwing things away! It's so liberating :)

I love your blog. Please check out my new blog! Support me if you can! :)

Thanks and I look forward to reading your future blog post.