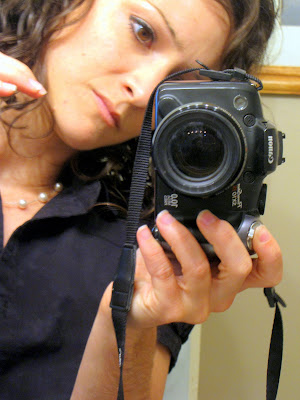 I've had the same nightmare for about three nights now. It is really, really awful! I wake up in a panic, my heart racing, my hands clutching at the pillow...I don't even think I can talk about it.
.
.
Okay fine. You've convinced me.
.
.
It always opens, as I come upon a magnificent view. Like a sunset or summery landscape. It's the most picturesque scene my eyes have ever beheld, and I stop, catch my breath, and exclaim to those around me to come and see. Nothing has or ever will compare to it's beauty.
.
.
Then, I excitedly reach for my camera, aim, compose, and shoot...except...something is terribly wrong! My camera isn't working!! I frantically mess with buttons and dials between desperate glaces at the quickly fading scene before me. And then...it is too late. It is gone. And I've missed my chance forever, to capture what could have been a life-changing photograph.
.
.
I told you it was awful.
.
.
.
. 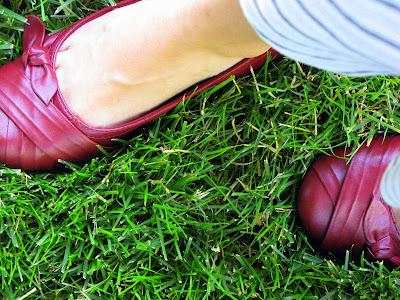 On the bright side, I treated myself to new shoes yesterday.

I know I just got rid of half my shoes, but in order to justify buying these, I had to get rid of yet another pair from my closet. And I've been pining after red flats for a LONG time.

This morning, as I was getting dressed for church, the red shoes were the first things I put on. As in, I had to remove my pajama pants from over them...which wasn't easy. And I've been home from church for 5 hours now, and...oh look...these babies are still on my feet. 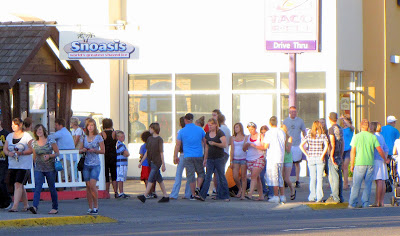 So, I'm guessing that summer in Rexburg is in full swing...judging from the line at the local SnoShack the other day.

I'm thinkin' that my red flats and I should take a walk for a snow cone sometime. Andrew can come too if he wants. 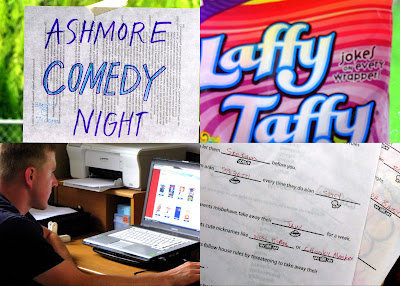 Our Friday night dates tend to be a source of contention. We usually don't have something specific planned, and neither of us want to be the one to come up with the night's activity.
.
.
But this time, I manned up (yeah that's right), and did the planning. We had a comedy night.

My dentist's name is Dr. Couch. I imagined getting my teeth worked on while laying nestled in a soft, fluffy, microfiber couch. The experience was not as pleasant, as I had envisioned. Maybe I should sue for false advertising.

After the all-day appointment, my jaw was so stiff and sore...I couldn't fit a spoon of Frosted Mini Wheats into my mouth for a week. I was sedated and on laughing gas, so I really don't remember much of the horrible ordeal. But I do remember two things:

1.) I woke up once to the the dentist's assistance wiping tears from both of my cheeks. Apparently, I had been crying. Slightly embarrassing.

2.) I woke up soon after we had begun, giggling like a goon (laughing gas, remember). I needed to tell the the dentist something, but the thought of saying it out loud sounded so silly to my brain, that it took a few moments of delirious chortling before I could even get it out.

I was a little out of it, but I'm pretty sure this was followed by another fit of hysterics.

I'm also pretty sure that Dr. Couch sighed heavily before un-clipping my dental bib. And that the assistants had to practically carry me to the bathroom where I very indignantly chastised them for thinking I needed any help whatsoever in the stall.

After I got home, and the medicines began to wear off, and I started to review in my mind the day's events...my cruel memory began to piece together that my oh-so-hilarious peeing episode may not, in actuality, have been an amusing dream. My reserved, appropriate self, would never announce such a personal need to perfect strangers. Right??

At this point, I'm maintaining that it was another nightmare.

But it wouldn't hurt to avoid Dr. Couch's office for a little while either. Just in case.

Email ThisBlogThis!Share to TwitterShare to FacebookShare to Pinterest Posted by Rachel Ashmore at 6:17 PM

I miss Snoasis!!! There is NOTHING like it!!! :) Hope you are having a great summer.

Your Snoasis picture makes me homesick for Rexburg.
This was hilarious. Probably my favorite post so far.